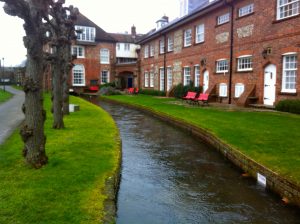 Many members will have noticed, unlike the photograph, the very low water level in the River Misbourne in recent weeks, and the fact that it has completely dried up in the area around Tesco. The Chiltern Chalk Streams Project Officer of the Chilterns Conservation Board has provided us with the following explanation:-

In contrast to many rivers elsewhere in the country, the R. Misbourne is currently experiencing a period of very low flows as a result of exceptionally low groundwater levels. The chalk streams like the Misbourne rely on groundwater for their flow (more than 90% of the total flow in the Misbourne is derived from groundwater) rather than surface runoff. Groundwater levels vary according to season with the main period for recharge being between October and March. Groundwater levels reach their peak in March/April (the timing differs from river to river) and then decline again throughout the summer and autumn until December/January (in a normal year) when the winter rainfall begins to reach the aquifer to start the recharge process again.  Last winter provided just 63% of average recharge to the aquifer which, on top of two previous years of lack lustre recharge, meant that groundwater levels peaked below normal levels and have declined ever since.  The Misbourne is not the only river affected. The chalk streams to the North are also suffering. The Ver, in particular is dry for long sections of its course. Groundwater levels are at their lowest level on record for the time of year. Lower even than in the major drought of 1997. Whilst the water companies have not declared a water resources drought, there is no doubt that the Chilterns rivers are in the grip of a serious environmental drought. Without above average recharge this winter the rivers will be worse off next year.

Julian Hunt, President of the Bucks Archaeological Society and one of our popular regular speakers, returns with his new talk “The Brewers of Amersham” about brewing in Amersham from the 17th century to the 20th[...]
Apr
28
Wed
7:45 pm Rural Clothing @ Zoom
Rural Clothing @ Zoom
Apr 28 @ 7:45 pm
A talk by Will Phillips, Keeper of Social History Collections at Bucks County Museum in Aylesbury. The talk starts at 8.00pm. If you wish to participate in the meeting please email to info@amershamsociety.org requesting the invitation.
May
24
Mon
8:00 pm Committee Meeting
Committee Meeting
May 24 @ 8:00 pm
If you wish to raise anything at the Amersham Society Committee Meeting, please contact the Chair, Dorothy Symes, on 01494 434858.