This is only a brief summary of the history of Old Amersham. A much more detailed history, including the history of many individual buildings, families, trades and events can be found on the Amersham History web site at https://amershammuseum.org/history. This also includes some information about neighbouring villages, especially Chesham Bois, Coleshill and Winchmore Hill.

Old Amersham is correctly known as Amersham; it was known by the Saxons as Agmodesham.

The earliest mention of a settlement was in AD 796 and was known then as Elmodesham. Amersham is mentioned in the Doomsday survey of 1086 and in the year AD 1200 whereupon King John granted a charter for a weekly market, an annual fair and two members of Parliament as a “Pocket Borough” were elected to represent the town. Two Amersham MP’s sat in the Houses of Parliament right up to the Parliament reform act of 1832.

Amersham is located on the banks of the river Misbourne. The wooded surrounds and good agriculture land have helped the town grow and become a central area for the community and the local markets have encouraged traders to base themselves in Amersham helping the local economy prosper.

Amersham was an active centre of dissent in the 16th century. On a hill just above the town is The Martyrs’ Memorial in memory of the Lollards burnt at the stake in the reign of Henry VIII. They wanted to read the Bible in English and pray in English.

During the English civil war Oliver Cromwell’s family lived in the nearby area at Woodrow High House.

From the 17th century prominent Quakers settled in the area and endured persecution. A Quakers meeting house can be found in Whielden Street in the town. Amersham also had two Baptist Churches and town’s Methodist Church opening 1899.

The main trades in Amersham were traditionally Chair making, Lace work and Straw Plait work. Amersham benefited from being on the main trade routes from London to Birmingham and Hatfield to Reading which gave rise to the Coaching Inns and facilities to support these trades.

Amersham would have been the first coach stop for travelers from London and became very important for providing overnight accommodation and “comfort stops” for the horse drawn coach travelers (and their horses).

At this important time in the town’s history many coaching houses and inns were founded all of which needed related businesses to support them. Breweries and Maltings helped grow the new trade and the Weller brewery became the largest employer in the town in the 19th Century and they also formed a chain of public houses around the surrounding area. The Weller Brewery stayed a family run business right up to 1929 when with no heirs to take over it was sold at auction thus ending the association of the town of Amersham and Breweries.

The Tyrwhitt-Drake fortunes declined in the 19th and 20th Century due to high death duties. Many of Amersham’s properties were auctioned off in 1928 to help finance the death duties owed. Shardeloes is no longer a single residence and has now been converted into luxury flats. During World War II it served as a maternity hospital for people from London to come out to the countryside to have their children, over 5000 children were born there during this time.

Post second world war, Amersham has prospered, particularly from the the 1970’s onwards as an attractive specialist shopping and leisure centre, with many restaurants and pubs and most recently women’s fashion shops. Many tourists, shoppers and visitors are drawn to its attractive setting and magnificent Georgian streetscape, with the greatest concentration of listed buildings in the whole of Buckinghamshire (168).

Old Amersham is also an attractive location for office employment where offices such as the sympathetic conversion of Badminton Court, formerly a Brewery and more recently a perfume factory have provided a ready supply of accommodation. However, by 2009 all the Banks in the Old Town, together with the Post Office had retreated to Amersham-on-the-Hill.

The arrival of a large Tesco supermarket store on the site of the former abattoir and pork pie factory at the eastern end of the town has added to employment, traffic and activity in the town with many shoppers lingering on to enjoy the delights the Old Town, but at the cost of the disappearance of traditional food shops such as butchers, bakers and greengrocers.

It is also a vibrant commuter town with many residents working in London and elsewhere, sometimes far away given its proximity to Heathrow and Luton airports and the national motorway network.

An interesting aside to the history of the town is that Old Amersham is often used as a location for film and television work and this has been chronicled in great detail by Matthew Jones on his Amersham News, Views and Information website. This probably started with its proximity to Denham and Pinewood studios and the BBC location in West London near the A40, together with its period look.

With acknowledgement to Matthew Jones and others. 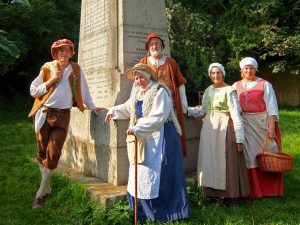