Section III of the booklet “50 years of the Amersham Society” covers the following chapters: Society – and the future of the Fair · Committee changes · The Millennium project · The Martyrs of Amersham · Loyal supporters and unsung volunteers · Jean Archer.

Society – and the future of the Fair

The first Royal Charter for both Amersham’s Fair and its Market was granted by King John at Bordeaux on 18th July 1200; it was the first town in Buckinghamshire to have a Charter Fair and a fair has been held for two days in September ever since. Following a potentially disastrous fire in an electric generator at the Fair in September 1991, the Society sent out a questionnaire to all members in 1992; the result indicated that, with certain safeguards, three-quarters of the respondents wished the Fair to continue to be held in the Old Town, as it had been for so long.

Members of the Society co-operated with Buckinghamshire County Council in 1993 in carrying out a review of traffic calming, parking and signage in the town, the first of many attempts to provide hard evidence of a problem and pose helpful solutions. The Society effected the preservation and repainting of the Vagrants Board in the Broadway in 1994, and the following year the Museum began to computerise the collections with a view to eventual Museum Registration.

In July 1995, the Society welcomed Barbara Webber as Hon. Secretary, an invaluable supporter of its various activities and an unfaltering secretary to succeeding chairmen. In 1996 Eric Corns had to resign because of ill-health and Jean Archer succeeded him as Chairman. Philip Plumbly also resigned as Hon. Treasurer but continued to run the charity stall at the market in Amersham-on-the-Hill, a task later taken on by Jean Johnson. The committee presented Eric with a sundial, which was erected in the Museum garden, bearing an inscription recognising ‘his dedicated work for the town and for the creation of the Museum’.

Sadly Eric died in June of 1997. He would have been deeply gratified that 750 people visited the Museum on Heritage Day 1997 and that there had been twelve conducted Town Tours on that day. The total number of visitors to the Museum in that year had risen to 3,205.

Monica Mullins published her chronology ‘Amersham through the Ages” as a Museum booklet in 1998; this was based on her Museum exhibit of that name relating significant local events to landmark events of national and international importance.

For some years, Monica had had to carry out most of her curatorial work at home, involving many trips back and forth to the Museum, and it was decided that plans should be made to replace the shop in front of the Museum with an office for the Curator. It had always been the hope to remove the shop entirely and reveal more of the medieval building, but there was no alternative space for an office and so this proved impossible.

Millennium Year 2000 provided the stimulant to the Society to replace the shop with a Museum extension as their Millennium project, with the design in the capable hands of Bill Mullins. This would provide the curator with a much-needed office with room for records and computers and also additional display space for exhibits; some internal changes would also be made to the Museum to provide improved access for disabled people. Anthony del Tufo worked assiduously through the paperwork involved in applying to the Heritage Lottery Fund, and was successful in obtaining a grant of £70,000 to finance the extension, with a grant of £2,500 from Chiltern District Council. Planning permission and listed building consent were eventually obtained and the work went ahead.

As closure of the shop would result in considerable loss of income, it was decided to re-launch “The Friends of Amersham Museum” under the Amersham Historic Buildings Trust umbrella with individual, family and corporate membership, to raise the funds needed to support the Museum for the future. Earl Howe kindly agreed to be the Patron, Ian Arthurton became Head of the Friends and Anthony del Tufo continued as chairman of the Amersham Historic Buildings Trust.

In 2000 the Museum received its registration, the Museum and Galleries Commission Certificate, as Registered Museum No. 1856, when the Commission’s inspectors confirmed that the Museum met all the required standards. The building of the Museum extension began in January of the following year, and, after a slow start, the work was completed in time for the Museum to re-open in August. How Monica had managed previously without a proper office is still a mystery, and all the records stored at home could now be safely stored in the new premises. Chiltern District Council provided a new computer for the office and she was then able to work on further displays in the additional space.

The Martyrs of Amersham 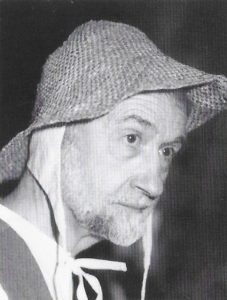 Monica Mullins also created in 2000 a new Museum exhibit concerning the grim story of the Amersham Martyrs, depicting the lurid spectacle of the burning of the martyrs, and this formed an important part of the inspiration for the Amersham Martyrs Community Play the following year. Stan Pretty took on the directorship of the project, and produced a community theatre rendition of the events leading up to the death of the Amersham Martyrs, performed in St. Mary’s Church, by members of the community of all ages and a choir of local children. It ran for four nights in March 2001 and was a sellout, and a tremendous success both financially and in widening interest in local history.

Peter and Marian Borrows subsequently devised a costumed Martyrs Walk, led by various characters from the Community Play, which has been repeated at monthly intervals during the more clement months in addition to the Society’s Town Walks. Michael Andrews-Reading also wrote an excellent booklet on “The Amersham Martyrs” for the Society, which was sold at the performances and in the Museum.

In 2004 the Amersham Martyrs Community Play was revived under the directorship of Stan Pretty with a new cast of characters and a new choir; this time, the performances were held on six evenings, after many weeks of rehearsal and planning, and again this was a sell-out – a great success in helping the community to appreciate Amersham’s fascinating history.

Whilst the Museum was closed during the building of the extension, diligent gardeners, David and Julia Godwin, continued to maintain the herb garden and Andrew McHugh kept the lawn neat and trim. The ‘Friends of Amersham Museum”, now well-established, raised much-needed funds and held enjoyable social functions.

Monica Mullins retired in 2003 after 20 years of commendably hard work as curator of the Museum. She and her husband Bill were suitably thanked at a retirement party in November of that year.

0n the 5th May 2004, the Society heard of the sad death of Jean Archer, the first Hon. Secretary of the Society and Chairman from 1997-1999. Jean was Mayor of Amersham from 1984 to 1987 and a well-loved local historian who had written eight books on various aspects of the history of the town and county – all best-sellers. Her knowledge of the town, its history and its personalities was legendary, and all those who conducted the Town walks were grateful for the gems of details she was able to pass on.

In tribute to her memory the Society set up annual awards for children aged 4-11 for a competition in aspects of local history. In May 2005, when the competition was commenced, there were 88 entries and in 2006 there were 151 entries from five local schools, and these were put on display in the Market Hall.

Jean’s other wonderful legacy to the Society was George Ward’s photographic glass negatives, an amazing collection of photographs of the town, local events and local personalities, taken between 1880 and 1930. George Ward’s photographic glass plates were digitised and enhanced in 2005 with outstanding results, and the Museum now holds the copyright on these. Some of these photographs were included in a Rotary Club Exhibition in the Market Hall in March; in September, it was possible to include a much wider range of photographs in a larger exhibition, when George Ward’s 1896 “Orient Express”car was given an airing from its current museum home near Eastbourne.

The Amersham and Chesham Bois Choral Society (Amchor) of today is a well-regarded choir of some 60 singing members, who come together from a variety of backgrounds and locations to embark on a repertoire ranging[...]